The capitalist spirit has diminished hugely in the US, which is admired worldwide for its entrepreneurial dynamism and culture. This is the theme of a full-page spread in the Financial Times (FT) that echoes concerns at the top of the US political system and among other policymakers, including the Federal Reserve, the International Monetary Fund (IMF) and the US Congress.

Publicly quoted companies are shrinking in number, with more leaving to go private than new ones joining. In parallel, a decline is taking place in the longstanding structure of equity capital funding through initial public offerings (IPOs), with new methods of raising money partly supplanting it.

These trends have been going on for a few years but have become more marked in 2016. Short-term cyclical effects are partly to blame, but a more powerful secular force is that the public quoted structure is losing its former status. Other equity structures are acquiring increasing importance.

Profits are supposed to be good for an economy, but The Economist argues strongly and persuasively that US corporate profitability is much too high, for unfair reasons, and needs to be reduced, for the sake of the economy and capitalism itself. This may not be music to the ears of the many fund managers wedded to the fortunes of the bigger, publicly quoted equities, but the statistics are telling.

The interconnected worlds of investment banking and asset management are undergoing radical changes, in some respects beneficial to asset managers and potentially problematic in others.

Investment banks are set to become a much more diminished force. The profitability figures are stark, pointing to the inevitability of this trend. According to the Boston Consulting Group (BCG), the average return on equity of the world’s largest investment banks is just 6%, a figure that is believed to be well short of their cost of capital. The evidence is that their business model has broken down and the reduced profitability is not just a cyclical phenomenon.

THREAT TO EUROPEAN ASSET MANAGEMENT FROM TOP US FUND HOUSE

An aggressive move by the top passive provider, Vanguard, into active fund management in Europe is set to squeeze the European asset industry further, as if the latter had not already had sufficient cause for alarm from potential regulatory pressure on fees. Vanguard’s European announcement in December followed a fierce price war between two of the top US exchange-traded fund (ETF) providers, BlackRock and Charles Schwab.

The prized-AAA status, once highly coveted as the badge of corporate quality, has lost much of its allure. The decline to near-|extinction of the number of AAA-rated companies is to some extent a measure of the reduced regard for the rating. Corporates are less bothered about achieving the standards needed. In the US, after the ExxonMobil downgrading in April this year, just two companies, Johnson & Johnson and Microsoft, retained their AAA status, whereas 98 US companies had this valued accolade in 1992.

Offices dedicated to managing the assets of a single family were hitherto considered a backwater of wealth and asset management, but no longer. The clout of family offices is now making itself felt in global asset and wealth management in several ways.

A shift has begun in buyout firms’ investment horizons to a much longer time frame from the typical seven years. Recently, a number of buyout firms have been setting up funds to mature after up to 20 years. Blackstone, Carlyle and CVC Capital Partners, three of the largest firms in the private equity field, are now making available funds that will mature in 14 years or more. Significantly, they are also content with lower returns of 12–15%, even 10% compared with the typical 20% of the traditional type. Their fees are also substantially lower, at 1% per annum, compared with the more usual 2% before.

Blackstone, the largest private equity firm, is no longer purely private equity, but is undertaking a range of different activities that make it difficult to classify. What is common to all these activities is that in every one of its different guises it is bringing off remarkable successes demonstrating a diverse range of skill and expertise.

Co-investment is changing the way in which institutions back private equity investments. The traditional model of clients, the limited partners (LPs) entrusting their money to the general partners (GPs), the owners of private equity firms, is now giving way to alternative ways of investing privately. The biggest institutions can consider investing directly in private equity. But the more common approach is for institutions to co-invest alongside the GPs in specific projects.

High technology has come to agriculture, holding out the promise of rescuing the planet from the danger of food scarcity within a few decades. It is about time as only a massive investment in agriculture can avert the world heading for a serious crisis. By 2050, the global population is expected to reach ten billion and food production needs to increase by 70%. Technology is the answer, as the amount of arable land cannot be grown by much, with 40% of land already taken up.

TOP JOURNAL SUGGESTS THE ‘DEATH OF THE FUND MANAGER’

The Economist magazine, in its leader and cover story, asserts that the fund management industry is becoming commoditised along the lines of books and music. The caption on its front cover refers to ‘The death of the fund manager’. These dire predictions need to be closely examined given the authority and the well-deserved reputation that The Economist magazine has for sound analysis - in this case bolstered by a report from PwC, another organisation with impeccable credentials.

The prospective and actual entry of internet giants such as Google and Facebook into financial services is causing many asset managers to quake in their boots, in fear of being supplanted. A recent report by PwC has indicated that opportunities are arising for leading internet and technology giants, including Apple, Twitter and Amazon, to rival asset managers in the light of their failure to keep up with technology. These tech giants will be able to “combine their reach, knowledge and influence with banking alliances to provide compelling asset management propositions”. It is suggested that one could provide front office services and get together with a back office company to establish an integrated asset management group. 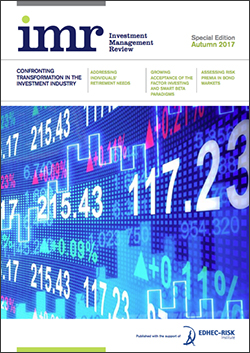 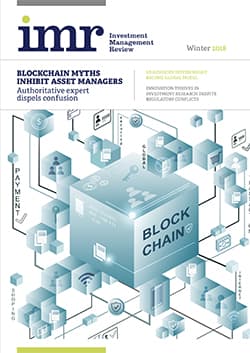